Here’s another lovely stop on this book tour fo you! Today I have an excerpt from The Snow White Effect by A.K. Mills! Stay tuned for a giveaway down below. 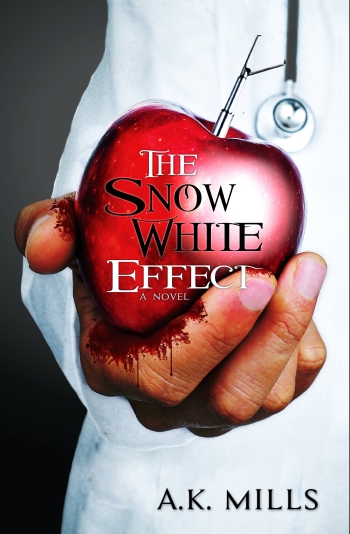 Dale knew he wanted to spend the rest of his life with Cindy from the first moment he saw her. Forty years later, nothing has changed. She is his best friend, his soul. When she dies shortly after having an elective procedure at Kendal Slate Memorial Hospital, he is left heartbroken with a million unanswered questions. Dale may not have a fancy medical degree, but he is convinced medical malpractice killed his wife.

At thirty-eight years old with four children and a promising medical career, Emma Speck is living her dream. Being a doctor married to a surgeon, she finds comfort and normalcy in their hectic lifestyle. When her beloved life of chaos is brought to a screeching halt after she receives a phone call no one ever wants to get, Emma is forced to question everything she once believed in.

Surgical department chair at Kendal Slate Memorial Hospital, Richard Oakley makes no apologies for his successes or failures. When his department comes under fire for harming patients, his attitude is no different; medicine isn’t perfect. Despite his attempts to ignore the meritless accusations, they’re not going away. In fact, the accusations are mounting, bringing with them elements of his past he had hoped to keep suppressed.

Having children was always a part of Addison’s plan. However, after suffering a miscarriage that nearly killed her, Addison decides it’s time to stop trying to get pregnant. Instead, she opts for a surgical procedure that will end her hopes of conception. The surgery, unlike her fertility, is straight forward and safe. The hospital, Kendal Slate Memorial, is reputable. Why wouldn’t she trust her doctor?

Four individuals. One hospital ignoring the truth. In this case, what you don’t know can kill you.

Dale stepped into the elevator with his head down, assuming the button for the lobby had already been pushed. Acknowledging life going on around him was more than he had the energy for. Three months. It wasn’t possible. How could Cindy go from being a happy, energetic hiker to the emaciated, lethargic skeleton that had just taken her last breath?

Her smile. A tear dropped from his eye. The cancer had eaten away the rest of her body, but it couldn’t touch her smile. Her smile. His heart lurched. She hadn’t smiled much the last couple of weeks, but when she had, it was like the first time he’d ever seen her.

Dale had been at the diner with his best friend Mickey when a group of girls came in, laughing and dancing around a blonde with a silver tiara in her hair.

“It’s her birthday,” one of the girls cried out, unsteady on her feet. “She’s twenty one!”

The birthday girl blushed as the waitress took their order and Dale couldn’t help but smile.

“I’m going to marry that girl,” he said to Mickey.

Mickey laughed it off, but Dale had never been more serious about anything in his life. When the waitress finished taking the girls’ orders, Dale called her over.

“Can you make one of your best sundaes and give it to that girl over there with the head thing on?”

The waitress grinned. “A tiara?”

“Whatever you call it.” Dale smiled back. “Can I have your notepad?”

The waitress cautiously handed it over. Dale wrote a brief note along with his number and handed it back. He watched with excitement as the waitress, also a cute blonde, delivered the dessert. His heart raced as he watched the girl read the note. When she finished, she showed her friends and they all smiled, looked up and waved.

“I’m the girl from the restaurant,” the caller said, her voice as delicate as he’d remembered. “From Michelangelo’s. I’m Cindy.”

“Hi Cindy,” he said through a smile that stretched across his face. “I didn’t think you were going to call.”

“I wasn’t,” she’d confessed. “But I thought, why not? Any guy who sends a sundae to a stranger can’t be that bad, right?”

That phone call had been forty years ago.

“That’s not the chick from the diner,” Mickey had said when Dale suggested they all

meet up for pizza after he and Cindy had been on a few dates.

“Yes she is.” Dale smiled affectionately, watching Cindy as she sauntered off to the bathroom.

Mickey cocked his head to the side, scrunching his face as he thought. “No, man. That’s not the girl.”

Dale laughed, impressed with Mickey’s memory. Usually girls were faceless to him, falling into one of two categories, hot and not. He didn’t squabble over specific characteristics. But there he was, telling Dale she wasn’t the one.

Dale smiled. He hadn’t stopped smiling since Cindy called. “She’s the one.”

“No.” Mickey shook his head. “That chick was hot.”

“Dude, is that the waitress?”

“But you sent a sundae to the other girl.”

“Sure did,” Dale replied.

“I don’t get it,” Mickey said as Cindy returned to the table.

Dale stood up, allowing Cindy to slide into the booth. “I gave the girl the sundae so I had an excuse to write something for Cindy.”

“What did you write?” Mickey asked.

“It said Happy Birthday. Enjoy the sundae,” Cindy answered. “Can you give this number to the waitress and tell her I think she’s beautiful?”

Their courtship was short, a little too short for their parents’ liking. But it was hard to deny their love. It radiated so brightly, illuminating everything within a mile of where they were. Lord knows they fought, but they also made up, growing closer with each argument.

He was working construction for his uncle’s company, with dreams of building his own house one day. Cindy, still working at the diner, answered with an emphatic “absolutely!” They were married eight months later, neither one of them looking back except to smile.

Dale shook his head as the elevator chimed on the third floor and the doors opened. This isn’t happening.

A native of Pennsylvania, A.K. Millsgave up a job in Information Systems to pursue her dream of becoming an author. The Parts I Remember was published in 2013.  The sequel, The Parts That Followed was published in 2014. When not writing, she enjoys spending time with her family and two dogs.

I revealed the beautiful cover for this book just a bit ago, and today I’m excited to say that I have the very first chapter of the book for y’all to read!

I am a Book Depository affiliate, click here to purchase books through my link.

Skillshare is an online community full of amazing classes and brilliant teachers. Try out two free months with my code here!